The Evolution of Robotics: A Brief History

For centuries, human beings have chased a dream of advanced machines that give us a higher quality of life.

Look at the media we’ve created based around robotics — The Jetsons, iRobot, Ex Machina, Wall-E, Archive — the list goes on. While many of these center around evil machines ready to take over the world, the reality is less… catastrophic.

In the real world, robotics has played a pivotal role in advancing technology, replacing humans in dangerous jobs, and automating intricate processes. The industry’s purpose has always been to create a life that’s easier and safer for humans.

Although some are still skeptical about using robots or having them incorporated into everyday life more often, robotics have come a long way since their early concepts. Each day they become safer, quicker, more realistic, and better integrated into many industries.

Let’s dive into the history of industrial robotics and how machines might incorporate into our work, lives, and processes.

The Birth of Robotics

The idea of robotics and AI was formed long before we had the capacity to bring it to life.

There is plenty of historical evidence of humans building and using their own robots — but not the humanoid, mechanical machines we think of today.

The Greeks and Romans are believed to have used automation systems for toys and tools. The Greek God Hephaestus supposedly built automatons to help him in his workshop. People in Europe and the Middle East used clockwork automatons for religious purposes.

Later, Isaac Asimov, a science fiction author, mentioned robotics in his 1941 story “Liar!” It’s believed to be the first mention of the term.

During the Industrial Revolution and the Age of Enlightenment, an increased focus on engineering, mathematics, and science grew in England, boosting the momentum toward the implementation of robotics in our society.

The Early Years of Robotics in Manufacturing

In the 1930s, the development of Numerically Controlled (NC) machines rose along with the popularity of computers, paving the path to industrial robots.

One of the first major inventions in the field of robotics came from Griffith “Bill” P. Taylor in 1937 and was implemented in the manufacturing industry. His robot was called The Robot Gargantua because of its large scale and strength.

Taylor created a crane-like machine that was designed to grab, rotate, and place blocks powered by a single electric motor. 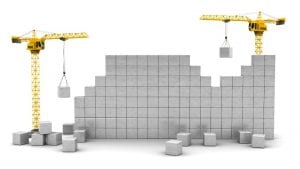 Think about the enormous cranes you see on construction sites used to move massive pieces of wood, cement, or metal; visually, this is what Taylor’s crane looked like. The biggest difference is that it worked without a human operator.

While Taylor is documented as a trailblazer in the automation of robotics, George Devol is known as one of the field’s founding fathers.

Devol filed the first industrial robot patient in 1954 and started a company called Unimation in 1956. The machines Devol patented were similar to Taylor’s but on a smaller scale. These machines transferred one object to another within 12 feet of space.

In 1962, General Motors adopted Devol’s machinery for its manufacturing, which was the first time robotic automation was implemented for high-scale manufacturing purposes.

At this point, robots were being used for welding in the automotive manufacturing industry. By 1969, GM was implementing 90% of body welds using Unimates in one of its plants.

These early robotic developments opened the door for a wide range of possibilities for robotics to make humans’ jobs easier and safer in the manufacturing industry.

In the 1990s, remote-controlled robots brought synchronization to the industry. The Delta Robot was designed to help package pretzels in Switzerland. This robot was significant because it was one of the first to use parallelograms to build a parallel robot with three translational and one rotational degree of freedom.

A major benefit of robotics today is that they are far more efficient and safe than they have been in the past due to improved mathematics, understanding, and safety protocols. While there are continual tweaks and improvements to be made, the industrial field is making technological strides when it comes to incorporating robots into its processes.

The opportunities for robotic use in industrial applications include robot-human collaboration, increased automation, and the implementation of artificial intelligence.

One example of robot-human collaboration is robotic storage tank cleaning.

At industrial plants, tanks that hold water, chemicals, and other liquids must be cleaned periodically. In the past, humans have been the ones to go into the tanks, exposing themselves to harmful chemicals and situations. To combat hazards, tank-cleaning robots were created.

Robots helping with industrial tank cleaning are remote-controlled by a human. Using this tactic for tank cleaning increases the safety and efficiency of workers while reducing the chance of human error.

The Future of Robotics in Industrial Plants

When we look back at the inception of robot-like systems in 1500 B.C., how we see robotics helping now is mind-boggling.

Robots are used in industries like healthcare, retail, construction, food service, industrial manufacturing, and many more. Before you know it, you’ll see and interact with robots daily.

As the pace of innovation continues to increase, we’ll be on the lookout for a rise in the internet of things (IoT), which gives robots the ability to examine and react to certain situations based on data. IoT enables your phone to connect to your car to let you know that maintenance is needed and allows doctors to remotely monitor patients.

You can also expect a rise in machine learning that allows robots to self-correct their programming instead of improving through trial and error.

The last trend to note is the rise of collaborative robots. Collaborative robots, or cobots, are what you may have guessed; these robots are used near humans and are designed to work in tandem. They are not intended to replace human workers.

An example of collaborative robotics is in an industrial assembly setting. A cobot is used for assembling pieces, drilling holes, and welding parts to relieve humans of tedious, time-consuming tasks while humans implement quality assurance at the end of the assembly process.

The unfortunate reality of all these innovations is this: owners who continue using outdated assembly, manufacturing, and maintenance processes will fall behind the competition. Start leveraging robotics in your industrial plants and factories today to make your life easier, keep your crew out of harm’s way, and increase productivity.

How To Reduce Plant Maintenance CostsIndustrial