Industries of all types are turning to robots and automation for both large and small tasks, and chemical plants are no different. When your chemical plant invests in robots or in companies that supply robots, your employees can focus on their daily tasks, and the robots can do the hazardous ones. In the chemical industry, there are several dangerous tasks that humans have been doing for years, but robots can be used to keep human employees safe.

The human eye is a good tool for inspections, but robots offer more precision at a faster rate. Any time that human employees have to climb ladders or go into small spaces for inspections, there is the possibility that an accident could occur. By using robots, humans can keep their feet on the floor and their bodies in safe spaces.

Drones are one type of robot that can help human employees stay safe. Chemical plants can use drones to inspect everything from chemical plant towers to the inside of manholes. They have made it possible to inspect stacks while they are fully operating at high temperatures. Before drones, those stacks could only be inspected when plants were completely shut down.

Small drones can scan small spaces that humans cannot normally see, like pipelines and electrical systems. They can get close images of chemical equipment, and thermal imaging cameras can see leaks or other issues before emergencies occur.

Related article: How You Can Save Money With Tank Cleaning Robots

One of the most dangerous tanks at any chemical plant is tank cleaning. The job is so hazardous because people have to go into small spaces filled with fumes and chemicals. When the tanks are cleaned, the chemical plant has to be shut down and employees have to be trained and carefully watched to be sure they are safe. Unfortunately, many chemical plants report accidents and deaths from tank-cleaning.

But, with robotic tank-cleaning, no human employees have to be put into dangerous situations. Humans manage the robots, but from a safe distance using a remote control. The robots can enter and exit the tanks with ease, and they do not need the same safety gear that humans need. They reduce overall project costs and are more efficient when it comes to cleaning tanks.

For example, when humans were tasked with cleaning a tank that measures 63×32 feet, it took them 67 days and 670 hours in the confined space. But, when a robotic did it, the project took only 11 days. The robots removed 10,100 bbls. No human had to enter the tank, and no injuries reported. These experiences are common for chemical plants that make the switch from humans tank cleaners to robotic cleaners. 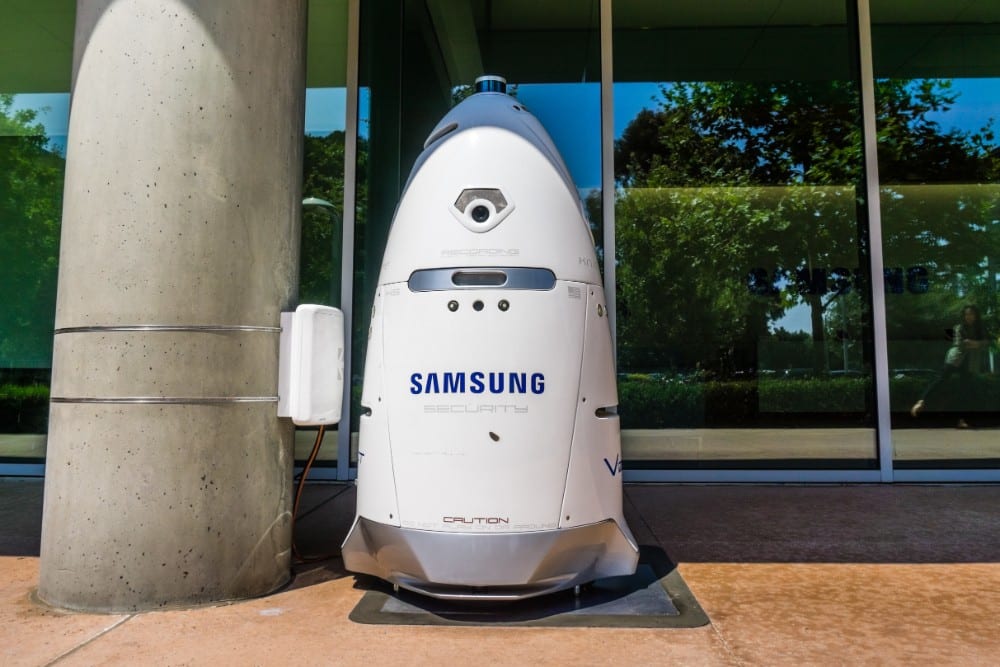 Robotic security guards can also be used to collect data while they are outside patrolling the area. They can collect information about contaminants in the air or on the ground, with the goal of recognizing what normal levels are and when they become dangerous.

Benefits of Robots in Chemical Plants

When you introduce robots into your chemical plant, you are making changes for the better. While robots cannot replace humans, they can augment their weaknesses and improve safety around the plant.

Robots can do many jobs faster than humans. For example, with tank cleaning, robots get the job done at a significantly faster rate of speed because they do not need to be trained, stop for work breaks, or quit to go home from the night. Robots can work in the dark, and they can function in a variety of environmental conditions.

When properly programmed, robots are accurate and avoid the common errors that humans make. For example, their sensors are programmed to detect subtle changes in the levels of contaminants in the air at a chemical plant. Humans would have to rely on their senses or on manual tests that can be conducted inaccurately.

When robots vs humans are used to clean tanks, the result is a cleaner tank in a faster amount of time. Humans make many mistakes while cleaning tanks, simply because the job is so stressful. But, robots do not experience stress, so they do not make similar mistakes. They clean the tank because that is what they are programmed to do.

Robots create safer working conditions for people. Robots can go into small spaces, climb ladders, and do things that are dangerous for humans. They do not have to worry about inhaling harmful fumes or exposing their skin to sludge or other hazardous chemicals.

In most situations, robots are also less expensive than human employees. Consider the tank that took humans over 600 hours to clean. Each of those hours needed to be paid. But, the robot only took 11 days. There is often an upfront cost to acquiring a robot, but they do not need to be paid or receive benefits.

Robots come in several sizes and shapes to fulfill a variety of needs. They also have several price points to meet budgetary needs, too.

Let Employees Do Their Jobs

When chemical plants use robots for tasks like tank cleaning, inspections, and security, humans can do other jobs. Consider the amount of time that plants have to be shut down for humans to clean, inspect, or maintain them. Instead, robots can do that, and plants can remain open. While robots do mundane tasks, humans can do the ones that require creativity and teamwork.

Robots are a wonderful way to streamline your operations. They can help you save money and time, and most importantly, they keep your people safe. What are you waiting for when it comes to adding robots to your chemical plant?

Take the risk out of tank cleaning

Industries That Can Benefit From Robotic Tank CleaningIndustrial