How Robots are Helping the Oil & Gas Industry

As technology progresses at a rapid pace, it is easy to see how robotics has become an important and necessary part of our lives. Robotics are now used in a variety of industries to improve working conditions for employees while increasing productivity. One of those industries is oil and gas, where new technology is being used in innovative and beneficial ways.

When oil and gas move through booms and busts, inefficiencies are amplified. Profit margins in the industry have dropped, which increases the need for automation. Without embracing automation, those profit margins continue to drop. Adding robotics and automation has an up-front cost as well as maintenance expenses, but it reduces costs elsewhere.

How are Robotics Used in the Oil and Gas Industry?

In the oil and gas industry, robotics and automation are being used in the production phase. During this phase, robotics are used in places where humans could be put in danger. Robots are used as remote-operated aerial drones and as underwater vehicles. They are also used for drilling and underwater welding. It is becoming more common for humans to be involved in controlling robotic machines rather than risking their lives in extreme conditions.

The various stages in the oil and gas industry include exploration, drilling, production, operation, and decommissioning. Robotics also makes these challenging stages easier for employees by reducing the chance for injury.

Benefits of Robotics in the Oil & Gas Industry

The benefits of using robotics in the oil and gas industry are numerous, ranging from improving productivity to decreasing injuries.

When oil rigs and drilling sites use remote-controlled robots, humans are kept out of harm’s way. For example, one robot is able to inspect offshore sites with a variety of sensors to create 3D maps of the surroundings in terrains that humans cannot access safely. These robots use four legs to move around and to use their cameras and microphones to look and listen. They use thermal cameras and gas detectors to determine the viability of the sites in real time. Robots like these are controlled by humans from safe distances. 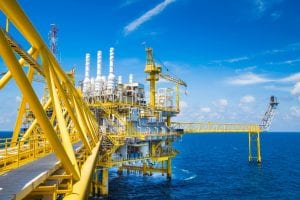 Another robot takes on the role of a roughneck, which is one of the dangerous jobs in the world. This robot connects drill pipes in challenging places like oil-bearing rock and the ocean. These efficient robots make life easier for workers on the rig, who don’t have to risk their lives to bring oil to the masses.

Safety has extended to automating complete oil rigs. In the North Sea, where conditions can be life-threatening, the Oseberg H oil platform has no humans on it. Humans visit once or twice per year, but with no living quarters, they do not stay long. This fully automated oil and gas platform is setting a safety precedent with its innovative design.

Another helpful robot being in the gas and oil industry spends all of its time underwater to conduct maintenance tasks and look out for necessary repairs. This robot has an underwater docking station and is controlled via remote from the rig. It uses a snake-like body to move through the water and get into areas that no human could. With its modular design, it can be customized to accomplish a wide range of jobs.

Another underwater robot moves with the aid of an Ethernet connection, so it can be controlled from anywhere on Earth through 4G technology and a buoy on the ocean’s surface. This robot performs inspections in an environmentally friendly way. It uses a self-contained battery system that requires no “mothership” and reduces the carbon footprint of any company that uses it.

By using robots to conduct frequent inspections, the chances of a wide range of accidents are far from happening. Humans will no longer have to go into dangerous places for inspections. And inspections reduce the chance of environmental disasters, like the Deepwater Horizon spill in 2010.

Related Article: How to Keep Your Tank Cleaning on Schedule 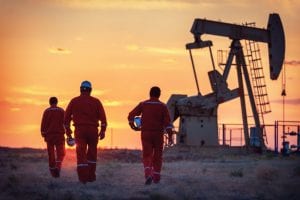 Robots, like drones, reduce operational costs by removing the need for added safety measures. With drones and other robots, human employees do not need to worry about dangerous conditions, like unpredictable weather. Robots automate routine and redundant tasks, which allows human employees to do more thoughtful and analytical tasks.

Operational costs include more than just paying salaries of workers. On the Oseberg H, no one is housed on the rig in the North Sea. This removes the need for the company to pay for heating and cooling, food, and housing for employees.

Robots remove the need for expensive safety gear and practices. When an underwater robot does inspections, and a human controls it from a remote location, overhead expenses decrease. The robot does not need work breaks or benefits.

Robots can do some tasks more efficiently than their human counterparts. For example, robots are better equipped to handle inspections. Robots do not take humans out of the process, but they allow humans to keep their feet on the ground and out of danger. For example, drones can inspect areas of rigs that would put humans in danger.

Using robots decreases downtime. When robots do special tasks, like inspections, employees do not have to be pulled from their regular job to do a task that a robot can do. Downtime on an oil rig can be costly. When robots are used in lieu of human employees, drilling sites and oil rigs can maintain business as usual.

Continuing Into the Future

The future of robots in the oil and gas industry is here, but it is not finished. There are several innovations on the horizon and many that have yet to be imagined. With the proven study of robotics boosting productivity, improving cost-efficiency, and upgrading safety, robots are here to stay for quite a long time. Using advanced technologies in the oil and gas industry will become ubiquitous and necessary.

Take the risk out of tank cleaning

How Robots Are Changing the Ways Industrial Cleaning is DoneIndustrial
×