How Robots are Helping Save the Planet

We are in a tough situation—technology has been both a blessing and a curse when it comes to protecting the place we call home.

As the world we live in gets more and more polluted and natural resources drained daily, companies are focusing on ways they can do their part to save the planet.

Eco-friendly and industrial revolutions haven’t always belonged together in the same sentence. However, in recent years, businesses have come up with solutions that can help them do the work they need to while also cutting back on the damage done to the environment.

As it turns out, utilizing the innovative capabilities of robots in everyday processes has proved invaluable in the fight to improve our delicate ecosystem. Let’s see exactly how they’re helping us change the way we do things so we can save the planet.

Not only does soil erosion have an effect on the economy, it also takes a toll on our precious environment. It is a major environmental threat to both sustainability and productivity, with an impact on the climate crisis and even food security. This phenomenon decreases the fertility of our soil, which negatively affects farmers’ crop yields.

Related Article: How You Can Save Money on Tank Cleaning with Robots

Here’s how it works: erosion sends soil-filled water downstream, creating heavy sediment layers and preventing streams and rivers from flowing as they should. This can eventually lead to more flooding—flooding that people, animals, and crops are simply not prepared to handle.

When erosion degrades valuable land, it makes it more challenging for the vegetation we need to grow well. With better land management, soil can be kept intact. Intact soil can continue carrying out its crucial job of growing carbon-sucking plants.

One of the biggest dangers here is how soil appears to be eroding faster than it is being formed at this point. In fact, data shows that the U.S. loses around $44 billion each year in the agricultural sector due to erosion.

Robots can help with this by inserting special plates into sheet piles and then driving those into the soil. These robots allow us to build retaining walls or check key dams for threatening degrees of corrosion.

Heavy duty diesel trucks, for instance, are responsible for approximately 150 tons of smog emissions in a single day. If autonomous robots can reduce this number, we have a chance to clear up the air.

With traditional tank cleaning—including human cleaning crews—tanks need to be open longer than they do when they’re cleaned by robots. This means a higher chance of letting harmful chemicals escape, further polluting the air around the location of the tank.

Some plants and industrial facilities waste up to a staggering 1.5 million gallons of water every year. In fact, traditional cleaning uses around 6,000 gallons of water to clean a single tank!

Robotic tank cleaning, on the other hand, doesn’t use nearly as much water or create as much waste as human crews do. Using robots also limits confined-space entry, which keeps humans safe and away from dangerous situations. 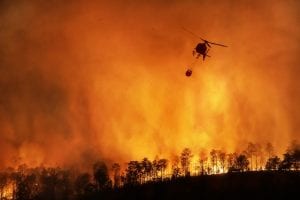 Sadly, the U.S. alone experiences an average of 100,000 wildfires per year. Robots can help combat wildfires and reduce the number of people that need to be put in harm’s way.

This is because robots can be equipped with water-propelling agents and fire extinguishers to contain serious wildfires. They can also be armed with technologies like infrared cameras, GPS, advanced heat sensors, and ever-evolving artificial intelligence capabilities. Plus, if they’re set up with GPS tracking and the appropriate sensors, they can also be used to save animals in peril when firefighting.

Protecting the Ocean and Marine Life

Robots are doing many things for our oceans, including cleaning oil spills, ingesting microbes and turning them into energy, and more. A robot can function for months, all while generating more energy than it consumes. It can also collect plastic waste to aid in cleanup—an act that would take humans much longer and use more resources.

In addition, robots are doing deep-dive research at levels of the ocean where humans cannot safely explore due to lack of light, intense temperatures, and crushing pressure. This helps protect animals and reefs while also helping us learn more about the creatures under the water’s surface.

In coastal areas, you’ll find barnacles, mussels, algae, and sponges—all of which are considered “biofouling” species. Biofouling destroys man-made structures like boats and ropes. They might not sound like a large problem, but biofouling can clog water flow, corrode pipes, and become harmful to marine life. By combating these organisms, we limit the amount of fuel used by ships and other marine vehicles, making them more hydrodynamic.

Aside from saving money, making processes more efficient, reducing harmful substances, and improving the environment, robots can go where humans can’t. They can take humans out of harm’s way, saving lives.

We only have one planet and we all share it, so we have to find ways to become more sustainable—it would be irresponsible to overlook all the positive impact robots can and do have on the world around us.